And for once, I would have relished the stares, to be believed. To not be invisible.

Invisible illness. Well, it is invisible, but you can most certainly hear me, so it definitely isn’t quiet. On the contrary, I consider myself to have a very “audible” illness. If you spend more than five minutes in my company, you will immediately assume either: 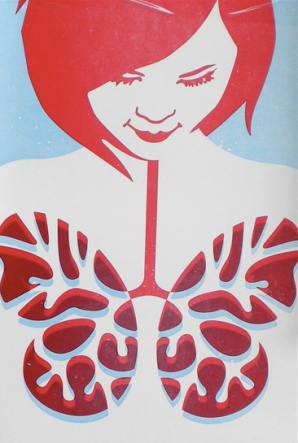 Neither of these assumptions is correct. I have Cystic Fibrosis, a genetic illness that primarily effects the lungs. Coughing, a lot, is the most obvious indication that there is something “wrong” with me. My thin physique, a result from Cystic Fibrosis induced malabsorption, can be explained away with jokes about fast metabolisms or good genes. However, the constant coughing is not so easily concealed. By this point in my life, I am used to the stares, the empty rings of seats during flu season, the unusually speedy exodus of others from elevators that I happen to be on, and so forth. On one hand, I get it. No one wants to get sick. Perhaps even a little bit of it is an unconscious holdover from our childhood fears of—ew cooties. So, I explain to those who hesitate long enough to listen that “I’m not contagious” and ignore the rest. This reaction is expected, almost routine.

Well, one should never get too comfortable with routine. It left me unprepared when faced with an altogether different sort of discrimination. I am accustomed to being ostracized because of my illness. Nevertheless, I never expected to be treated harshly simply because I appeared fine. Not being ostracized because there is something wrong with me, but the converse. I look fine, so there CAN’T be anything wrong with me.

This summer I spent the day at an amusement park with my friends. Altogether a great experience. Roller coasters, the delightfully indulgent park food, and carnival games. The only detriment, besides the smokers everywhere, is the sheer amount of walking required to get around the park. This place is HUGE. Now, all of my friends are aware of my illness, so they make pains to go relatively slowly. Still, it means traversing several miles, most of which are uphill, to go from ride to ride. I can walk, I might be puffing and blowing beside you like the Big Bad Wolf attempting to blow down a house, but I’ll eventually get there. I’m just stubborn enough to make myself do it, too. I want to be able to walk everywhere and keep up with my friends, so I do . . . until I can’t anymore.

Refusing to acknowledge to myself just how exhausted I was after a day of slogging up and down miniature mountains, I agreed when we decided to walk back to the car instead of waiting in the hour long line for the tram. I honestly thought I could make it back alright. I wasn’t too, too tired, and we had walked halfway to the park in the morning. No problem. Well, of course, I made it to tram stop B, before my mom made me admit that I was too weary to soldier on. On the verge of literal collapse, I sat on a bench and tried to get my breath back as we waited for a tram to come by. The first one came and stopped after we flagged them down. The tram employees told us that they weren’t allowed to take us to our car, because they were on the way in. We should wait for a tram going in the opposite direction. After explaining what was going on, how I was too sick to continue walking, they left.

Not before, however, one employee made the snide remark over the loud speaker to be heard across the parking lot:

“If she was so sick, why’d she start walking?”

I was taken aback. I felt like someone had literally slapped me.

However, I let it go, not having the surplus energy to chase after the tram as I wanted to, to tell them off. To explain that I wanted to be able to do it, but I couldn’t.

Finally, another tram came. This tram was going in the right direction and had many free seats. With relief I anticipated finally getting to the car. Yet, when we tried to board, the tram operator wouldn’t let us on. My mother explained my illness while I sat there, still attempting to force air into my overtaxed lungs. We were tersely informed that they weren’t allowed to pick up anyone on the way out. Apparently, people try to bypass the line at the park entrance by walking up to the next tram stop. My mom, now noticeable upset, said:

“But you don’t understand, she’s sick.”

The tram driver literally looked at me, looked at my mother, and said. “Too bad. Once you start walking, you have to keep walking.” He then smiled, and drove away.

This man looked at me, saw a skinny girl with two working legs, and assumed I was fine. I’m not in a wheelchair, nor do I have a cane.

I must, therefore, be lying.

How was I supposed to prove to this man that I was sick and needed assistance? Pull open my shirt and show him my scars? Flash my port?

I have a chronic illness. I am walking around with 30% lung function and a lung volume of about 1 litre. That Tuesday was the first day that someone had ever refused to believe me, after I had revealed to them my illness. And for once, I would have relished the stares, to be believed. To not be invisible.

← 60­-Second Guide to Rheumatoid Arthritis
Actually, I Am Disabled →

6 thoughts on “And for once, I would have relished the stares, to be believed. To not be invisible.”